In partnership with Universidad Adolfo Ibanez’s Center for Experiences and Service (CES UAI), his conference explained to over 100 designers, marketers, and representatives from top digital marketing agencies how traditional web design is obsolete and, instead, how to marry design, marketing, and sales.

This was Knight’s first visit to Chile and discussed the continual improvement process that HubSpot is undergoing to renovate its Inbound Marketing and Sales website, receiving over 8 million visits a month, introduced in November at the Inbound 2016 conference Boston.

“I had a wonderful time speaking at the Santiago HUG at UAI today. There is a lot of talent in Chile, and the opportunity to disrupt and innovate has never been greater. Now is the time to be open to new ideas, to take risks, and to think on a global scale. There has never been a better time to be an entrepreneur, marketer, or designer.”

To Austin Knight, UX design is a “human-centered approach to design and marketing, at the center of every decision.”

For those of us who run digital marketing with content as king… we were mistaken. “Context is King,” according to the UX design leader.

“94% of a user first impression come from web design”.  That is why UX “is a human-centered data inspired design that assists both the users and the business in achieving their goals”.

“We don’t make decisions at a boardroom. We’ve got no customer (…) You’ve got to back every statement you make and challenge you to take with data and information about the people using your products”. 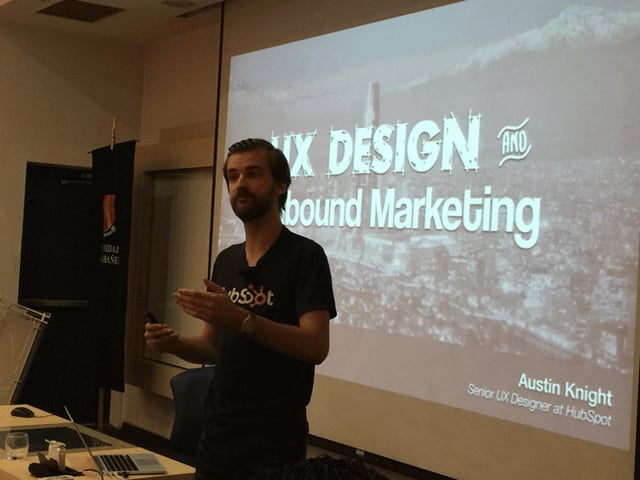 The attendees had a series of questions:

How do we educate our customers in UX Design?

Austin Knight admits this is a challenge for design agencies. “You have to demonstrate as much as you possibly can,” he said. However, high-level executives “are usually very focused on very straightforward 3 to 5 quantitative metrics or goals for that quarter, so explaining to them from design or content first is not going to communicate to them”.

“What I'd care about as an executive is how to move metrics and grow the company to provide more value to the customers.”

How different is User Experience in Latin America from the United States?

Austin Knight confesses that he doesn’t see many differences at an individual level. “An individual designer in Rio or Boston’s approach to design, or his understanding of tech is usually pretty similar. They are certified geniuses”, he says. “With the internet, there is no excuse to be limited in a physical location.”

However, he has noted differences on a networking and organizational level. “I think the cultures of organizations around the world are different. For example, there is a huge culture of innovation in Boston, New York, Seattle, or San Francisco, with companies facing serious competition.

For the same reason, he challenges Chilean companies to look beyond their borders:

Augmented Reality, The future of UX

Knights predicts that, even though the Internet of Things has been a common trend in 2016, the next step for UX designers and User Experience will be Augmented Reality.

“We will go from designing for screens, to designing experiences that are completely fluid, flexible and immersive.”

HubSpot’s Senior UX Designer divides his year as a Lean UX Design mentor for Design Lab and Columbia University. In addition, he spends part of the year in Boston- near HubSpot headquarters- and Rio de Janeiro- where he is researching design techniques in South America.

Knight has been traveling the world to tell his experience. In 2016 he toured cities like Boston, San Francisco, Warsaw, Las Vegas, Rio de Janeiro, Sao Paulo, and Washington D.C. to continue in 2017 in Johannesburg, South Africa.

How to drive alignment between Sales and Customer Success Teams

How to integrate SalesForce and HubSpot - Step by step guide

Ranya is a serial entrepreneur with over 8 years of experience working on the HubSpot CRM. She loves pushing her sleeves up , and getting s*** done. When she is not running her HubSpot partner agency, you can find her upside down on her yoga mat.

How to drive alignment between Sales and Customer Success Teams

Client X1 is the global leader in remote preservation and collection software. With more than 600,000 users in 20,000 different ...

This article will discuss the steps needed to successfully and easily migrate your website to HubSpot.

How to integrate SalesForce and HubSpot - Step by step guide

In order to be able to use the HubSpot-Salesforce integration you will need the following subscriptions, access, and permissions.

HubSpot vs. Pipedrive Which One to Choose?

If you are looking for a new CRM for your business, chances are you have seen Pipedrive and HubSpot names popup in many searches. Here in ...