The Inbound Sales process in Latin America will undergo considerable changes to close deals and engage with prospects, according to the most recent State of Inbound report by HubSpot.

Each year, Inbound Marketing and Automation expert HubSpot runs a State of Inbound Report, where it surveys marketers and salespeople from around the world around their priorities, challenges, and strategies they plan.

This year, the report is looking at what’s coming in the future of digital marketing and online sales strategy for Inbounders.

All around the world, marketers want to convert more of their contacts or leads into customers and prioritize the growth of their organic presence and writing blog posts.

“With data collected from all corners of the map, this document represents over 132 countries. A truly global community.”

However, Marketers’ content priorities don’t align with what customers want to consume.

“People are most likely to skim blog posts and longform business content. Instead, consumers pay most attention to videos, social posts, and news articles.

On the other hand, marketers should diversify their blog format and content to attract prospects:

“Marketers should invest resources into diversifying their content with multimedia creators and make sure that blog posts are easily digestible to reflect skimming habits.”

There are important differences in these trends by region. In total, 39% of respondents for this year's report come from Central and South America, making it the region with the most respondents: 1,805 people.

What are their priorities? How do they set apart from the rest of the world? The data speaks for itself, and sales are one of the biggest pain points around the continent.

“There’s a disconnect between buyer expectations and traditional sales tactics. New technologies are shifting the buyer’s journey, changing where consumers buy and what they want from sales calls. It’s up to the seller to adapt.”

1. Latam wants to push forward into the delight stage of the buyer’s journey

Marketers and salespeople in the region believe that they are not making the most of their current customer base and want to push further in that direction. Besides converting contacts and leads into customers, the second most important marketing priority in Latin America is increasing revenue from existing customers.

👉  Related post: What is The Buyer's Journey and How to Use it in Your Marketing 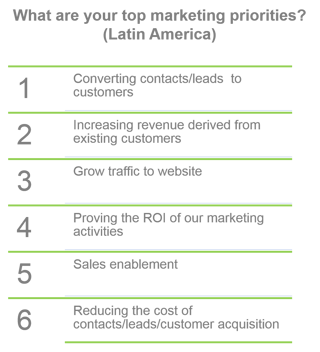 2. Closing deals and getting responses, the most difficult change for Latin American sales

While closing deals is the most common pain point of any sales agent around the globe, getting a response from prospects is the second issue that Latin American salespeople consider the most difficult to address, compared with 2 or 3 years ago (39%). It's not about getting in touch with them via email or phone (an area where North American reps have more problems). Numbers are small in that area, but they appear to need proper lead nurturing techniques to prompt better responses from their calls and emails.

Globally, it has become increasingly difficult for sales to get a response from prospects. This problem is an important indicator of why Latin American sales reps are taking particular directions to empower sales representatives.

3. Customer relationship management and engagement platforms, the top technologies to purchase by 2017

Latin Americans want to enable their sales teams with intelligence and advisory products to prospect customers and better pitch a deal to them. 29% want to invest in CRM software, while 20% plan on spending on the sales engagement platform. 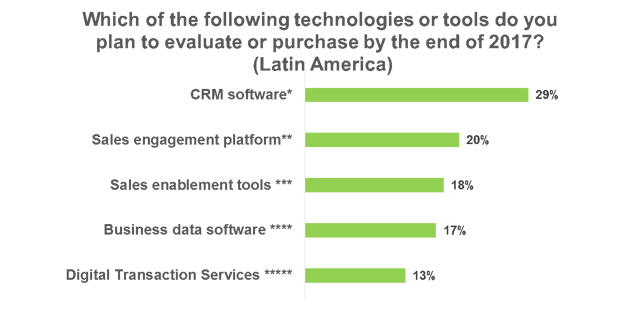 4. Prospecting leads and closing the deal, the most pressing challenges

As opposed to regions such as Australia and New Zealand, where the top priority is qualifying leads, or the Asia Pacific, where they struggle with identifying the Lead, the top challenges in Latin America is prospecting (34%) and closing (30%), followed by identifying the lead (24%). Regions where Inbound Marketing and sales are more developed, such as North America, show the highest concern rates on prospecting leads (47%). However, in that part of the world, identifying the lead is no longer the biggest issue, as only 8% of people claim it as a top priority.

5. The telephone is still Latam’s best friend with prospects

Asian countries lead the use of email to get in contact with potential leads. While 28% of companies are prioritizing social selling worldwide, Latin American consumers are somewhat laggards in adopting this mode of engaging with salespeople. They still find most success over the phone (40%), followed by email (25%). While in North America, platforms like LinkedIn are growing as a connecting tool (16%), Latin America leads Facebook as a connection platform with leads (11%). 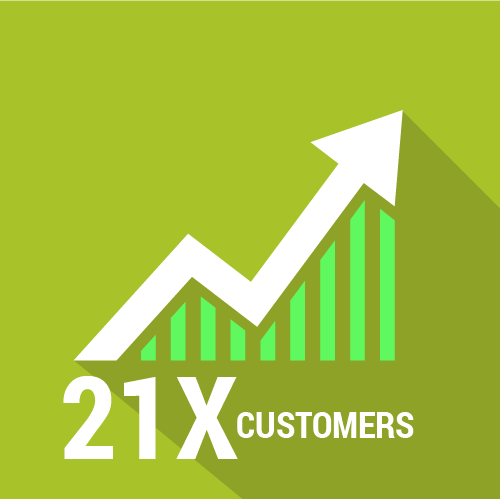 Ranya is a serial entrepreneur with over 8 years of experience working on the HubSpot CRM. She loves pushing her sleeves up , and getting s*** done. When she is not running her HubSpot partner agency, you can find her upside down on her yoga mat.

Content marketing is an exciting strategy for those who need to inform, provide orientation and raise awareness to their prospective ...

Customer relationship management for nonprofits is not easy. Their lead nurturing strategy, rather than a funnel, is a continuous ...

If you think your content strategy has what it takes to capture more leads, then think again. You’re probably applying the wrong ...

What can one say that hasn’t been already saying in the good ol’ paid ads vs. organic traffic debate?